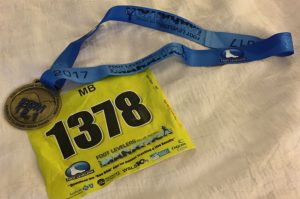 Hills, mountains, and thirty-seven hundred and ninety feet of elevation change, oh my…  When I spotted the Blue Ridge half marathon through a Facebook ad, I knew I wanted the experience and challenge of running this race.  Since last September I have ten half marathons under my belt, I’ve become what they call a “half-maniac or a half junkie.”  My love for running started six years ago, still a beginner by running standards, within the last year I’ve trained harder and shifted my pace from a 15:30 minute mile (walker) to a 12:30 minute mile (runner).  This race had my name all over it!

From January to March 2017 I’ve run five half marathons (St Pete’s Beach classic, Miami half, Sarasota Music half, Ft. Lauderdale half marathon, and Treasure coast half marathon), all courses flat as a pancake.  What excited me about Blue Ridge Mountain was a change in scenery and elevation, a next step in my running career.  Blue Ridge Mountain half marathon motivated me to train harder, work on my endurance, along with strength.   I loved the thought of breathing in the clean mountain air.   I had to start working hills into my training regimen if I had a chance of crossing the finish line.  In Florida (where I live), the only hills to run are the long and tall bridges that span the intercostal waterway.   Is this race really “America’s toughest Marathon? I wasn’t spooked.    Six weeks of bridge training upped my game, I felt stronger and my running endurance and pace improved.

Let’s fast forward to race day. The looming threat of a storm didn’t scare away the thousands of other runners I stood next to at the start line. The air warm with a touch of humidity, not the sauna kind of warmth I’m accustomed to running in South Florida, a few sprinkles hit the ground, which made it just perfect running weather.   It was nice to see runners of all ability levels lined up in the starting coral.  I didn’t feel like I stuck out like a sore thumb.  The cannon sounded, off we jogged.  I flowed through downtown Roanoke with the pack.  An easy run the first mile/mile and a half the course as I paced a pretty good time with my run/walk interval timer.  The course turned upward as I tried to keep the pace on the way to the top of Mill Mountain. 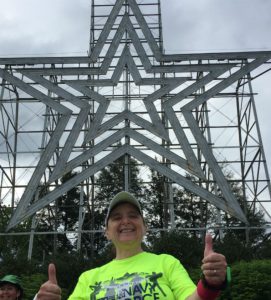 After a bit of a climb (maybe .25 miles), trying to keep up, huffing and puffing, I turned off the run/walk interval timer and walked along with rest of the crowd as I took in the beauty.  The two mile hike seemed more like four maybe five, my legs heavy in the hopes they would loosen up, I’m still middle of the pack, feeling good.  The tough six weeks of training on our limited elevation showed in my stamina as I kept climbing, I don’t think I could have made it up the first mountain a year or two ago.  Once I reached the top of Mill Mountain (which boasts the Roanoke Star) I was rewarded with volunteers handing out water, treats, and they even had helpers to snap photos in front of the big star!

After a fantastic water and treat stop, I was ready for the three mile decent back to downtown Roanoke.   My run/walk interval timer still in the off position I no longer needed it as I picked up the pace and glided downhill, as if I caught a ride on a cloud.  Still keeping a good pace, I glided to the bottom as the course leveled out.   I then ran through the greenway park along the Roanoke river reaching mile six.  Almost half way through the course, my energy level still high, of course the rain started.   I stopped put on a poncho, but the plastic made me sweat, so I took it off after a quarter mile.   Have I mentioned that my new pink running shoes have gotten wet every time I’ve worn them?

By the time, I reached the second mountain climb it stopped raining.  I was on my way up to the toughest part of the race, Peakwood Mountain.  Peakwood was much steeper and curvier than Mill Mountain, with a very big incline and at that point I slowed way down.   The chat with my husband and fellow runners helped me get through the long two mile climb (which seemed like eight) the distraction did me good now that my muscles were even tighter and ached like crazy.  It takes a positive mindset to take on a challenge of this nature.  Once summited (which I felt would never happen) a party was in full swing, as the whole neighborhood turned out to welcome and support all the runners with hydration and fueling choices, hands down the best water stop on the course.  Once hydrated and fueled up I got my second wind for the decent down the hill.

I headed back down the hill with more of a guarded pace, the road slippery from the earlier rain.   My mind whirled the last three miles, I told myself, I made it…I’m going to cross the finish line…I love running!

One of my favorite homes I ran past on the last leg of this incredible journey of 13.1 miles had pink flamingos covering their entire front yard, with a big inflatable pink flamingo keeping watch over the smaller flock.  I stopped and asked if I could take a picture in this sea of pink flamingos.  I have a friend who loves them, and the homeowner was more than gracious, wished us luck and said we weren’t far from the finish.

Every finish is different, but this finish was a huge accomplishment. After running more than ten half marathons since last September and five half marathons since January I knew I was up for the challenge.  I have to say the Blue Ridge Mountain half marathon lived up to its slogan “America’s toughest road marathon (in this case half marathon).”   I owe much credit to my running partner in crime (my husband) as he pushed me past my limits and never gave up even when I ran slow. Roanoke had some of the kindest volunteers, as it was one of the best organized races I’ve ever run. Later that evening as I relaxed with a bag of ice on my ankles I reflected on a beautiful and challenging race   The Blue Ridge half Marathon ranked as one of my favorite races, and it’s a no brainer in deciding to run it again next year even stronger!